Nikki is a 25-yr 2nd grade teacher veteran who thought she was just under a lot of stress after going to doctors for about 4 years. Eventually Nikki was told she was battling Hypothyroidism & Grave’s Disease.

The medication she was put on provided a temporary relief until symptoms started to take a nose dive.

Exhaustion that prevented her from living outside of work life once she got home.

Brain fog so terrible that she and others thought she was losing her mind and experiencing the initial signs of Alzheimer’s!

She consulted with her doctor to explore a change in diet as a way of managing the symptoms but was told that nothing could be done.

Grave’s disease crippled her life – she couldn’t manage the stress of it all and it eventually affected her relationships – with her students, her family and friends. She had a fear that her body was failing, and she would someday end up with a total loss of memory!!! Her teacher’s aide even suggested taking a “small white pill” to combat the brain fog!

That was not acceptable, so, Nikki switched doctors and received even worse news!

The new doctor suggested for her to undergo Radioactive Iodine Treatment to kill her thyroid gland, so that she could avoid the possibility of liver failure due to the meds. He went as far as recommending her to remove her thyroid gland altogether. If you ever met someone without a thyroid you know that this never solved a problem.

Nikki was at her wits end. But she was not ready to give up. Refusing to accept total defeat, she began to research, and found us!

A couple of weeks into the program, Nikki was coming home after school with enough energy to make dinner, walk the dog, spend time with the husband (who you will soon learn also had life altering changes to his health after Nikki’s program participation)!

She even had enough energy left over to play volleyball!! The same person who was dragging and barely making it home after school and thought she was losing her mind!

A few short months later, her thyroid numbers were so great that her doctors had taken her off hyperthyroid medications and told her that… the Grave’s is now in remission!!!

However, here is what we see every single time – when the person we work with gets better and benefits, so does the rest of his/her household.

Nikki’s husband’s cholesterol that had been controlled only by medication and was still high, had improved! His labs were so great that even his life insurance provider noticed it and offered him more life insurance!!!

So, listen to Nikki’s interview – see what made it possible for her to reclaim her health. And then… if you are ready to start feeling amazing, like she did, without having to waste another day of your life to your hormone imbalance, click on THIS LINK to schedule your free 15-min Health Clarity call with our team. Let’s see what kind of great future is available to you.

NIKKI’S STORY IN HER WORDS

See how Nikki is doing a year later. 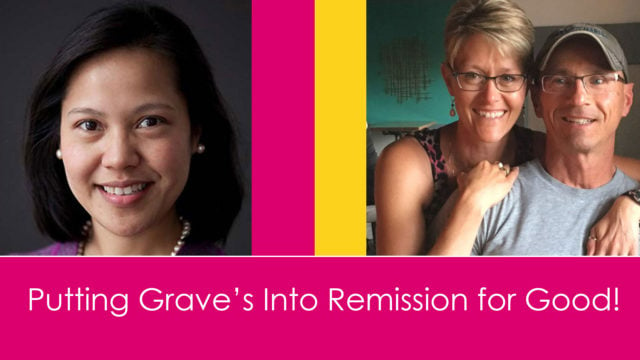 How They Put Graves' Disease into Remission

[…] We did an interview with them when they first graduated from the program. You can catch Ochie’s “in progress” report here, and Nikki’s here. […]

How I Reversed Hypothyroidism Naturally

[…] you are struggling with a thyroid disorder (hypothyroidism, hyperthyroidism, Grave’s disease, Hashimoto’s, Thyroid Eye Disease) you might have heard from your doctors that the answer is […]